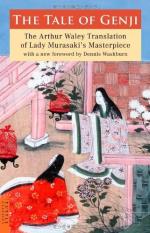 Murasaki Shikibu
This set of Lesson Plans consists of approximately 118 pages of tests, essay questions, lessons, and other teaching materials.

2. What does Murasaki compare Genji's behavior to since his visits to the Princess Asagao?
(a) Very happy.
(b) Like a stranger.
(c) Mean.
(d) More in love than ever.

4. What would hold Genji back from traveling away from home?
(a) Murasaki.
(b) Rokujo Lady.
(c) His son.
(d) His career.

5. What is believed to be the cause of the situation in Genji's homeland since he has left home in Chapter 13?
(a) The weather.
(b) Moon and star formations.
(c) The alignment of the planets.
(d) Genji's exile.

1. Who is Genji's former nurse?

2. With whom does Genji decide to travel home after living in exile?

3. Who attempts to arrange a meeting between Genji and Utsusemi?

4. Where does the Princess Asagao live?

5. How does Murasaki return the Empress Akikonomu's kind gesture in Chapter 24?

1. Why may it be problematic for Genji to take care of Tamakazura?

2. What does Genji decide to tell To no Chujo about Tamakazura? Why?

3. How does Genji feel after the death of Kashiwagi?

4. What happens after Kaoru finds out that Ukifune is alive?

5. What happens to Genji as he continues to grow old?

6. Describe the "masterpieces" Genji works on in Chapter 32.

7. It is discovered that Yugiri has never laid eyes upon Murasaki, the woman who acts as his mother. Why does Genji wish to keep her hidden?

8. During Kaoru's meeting with the Emporer, what is the Go board used for?

9. What did the fortune teller predict for Genji?

10. What has become of the Safflower Princess since Genji's exile? Explain.

More summaries and resources for teaching or studying The Tale of Genji.

The Tale of Genji from BookRags. (c)2020 BookRags, Inc. All rights reserved.