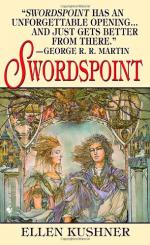 Ellen Kushner
This set of Lesson Plans consists of approximately 121 pages of tests, essay questions, lessons, and other teaching materials.

How Applethorpe Lost His Arm

Write a dramatic story detailing how Applethorpe lost his arm in the glory days of his swordsman career.

Create a movie poster for your own film adaptation of Swordspoint. Include your film's title, indications of its genre, and the actors, director, and screenwriter. Add a tagline to your poster to both attract viewers and communicate what the story is about. With your poster, include a cast and crew list that tells who you've chosen for the film an why you've chosen them for their roles.

Write a tavern song about swordsmen and sword fighting that the peasants might sing in the taverns of Riverside.

Rise of the Superstition about The Swordsman's Tragedy

Make a comic book detailing the rise of the superstition about "The Swordsman's Tragedy" that tells the story of the fabled death on stage at the play...

More summaries and resources for teaching or studying Swordspoint: A Novel.