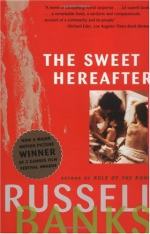 Russell Banks
This set of Lesson Plans consists of approximately 114 pages of tests, essay questions, lessons, and other teaching materials.

Create a travelogue about upstate New York, the setting for this book. Be sure to include highlights of attractions, events and natural resources that will appeal to people considering a trip to this beautiful state.

Write a Song or Poem

Write a poem or song depicting some aspect of life in Sam Dent either before or after the school bus crash.

Imagine that you could have a conversation with Banks' laptop. What do you think it would say? What questions would you ask?

Write the names of the characters from the novel on slips of paper and place them in a hat...