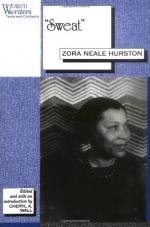 This quiz consists of 5 multiple choice and 5 short answer questions through Pages 2-3.

1. When Delia tells Sykes she is not in the mood for a fight because she has just come from a particular place, what is that place?
(a) Church.
(b) Bertha's house.
(c) City Hall.
(d) The corner store.

2. What instruction does Sykes insist that he has given Delia over and over again without her capitulation?
(a) To answer him when he asks her a question.
(b) To keep the stove clean.
(c) To keep white people's clothes out of the house.
(d) To have his dinner ready when he gets home from work.

3. What does Delia do with the clothes after Sykes steps on them?
(a) She stands between him and the clothes to protect them.
(b) She throws them at him.
(c) She gathers them together again.
(d) She takes them outside.

5. When one of the men's wives had repelled Sykes's advances, she had told him that Delia worked so hard that she bet everything in the house tasted like sweat and what?
(a) Soapsuds.
(b) Lye.
(c) Grime.
(d) Mud.

1. When Delia tells Sykes that she has been taking in laundry the whole time they have been married, what question does he immediately ask her?

2. What gesture does Delia make toward the men on Joe's porch as she passes by?

3. What does Delia say she does for her pony that makes him belong to her?

4. When Joe Lindsay says that there ought to be a law about Sykes's behavior, he says that Sykes "ain't fit tuh carry guts to a" (3) what?

5. Where does Delia say Sykes would disappear to with all of his wages during the first year of their marriage?

More summaries and resources for teaching or studying Sweat.