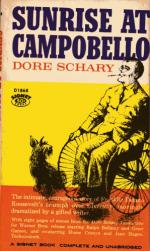 Dore Schary
This set of Lesson Plans consists of approximately 145 pages of tests, essay questions, lessons, and other teaching materials.

This quiz consists of 5 multiple choice and 5 short answer questions through Act 3, Scene 2.

3. How does FDR feel about the concept of "noblesse oblige?"
(a) He feels that it is the way of a new America.
(b) He feels it is archaic and unfair.
(c) He supports it in theory.
(d) It angers him to the point of throwing a pillow.

4. What organization does Newton Baker want to submit a resolution for the Democratic party to support?
(a) ACORN.
(b) Movement for a Democratic Society.
(c) NATO.
(d) The League of Nations.

5. What concern does Eleanor have for FDR if he decides to help Al Smith?
(a) FDR would be away from home for three weeks.
(b) FDR would have to stand for nearly 45 minutes.
(c) FDR would be supporting the underdog.
(d) Al Smith is not an honest man.

3. Which child does FDR decide to have stand beside him at the national convention?

5. Who does FDR believe will win the Democratic nomination in 1924?

More summaries and resources for teaching or studying Sunrise at Campobello.