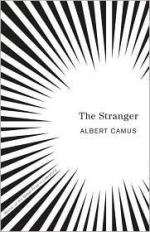 The Stranger Chapter Abstracts for Teachers

Albert Camus
This set of Lesson Plans consists of approximately 132 pages of tests, essay questions, lessons, and other teaching materials.

• Meursault, who lives in Algiers, North Africa, receives news that his mother has died and the funeral is the next day.

• Meursault asks for two days off from his job and even though he receives permission, he feels his employer shows no sympathy.

• Meursault quickly eats lunch at his favorite café and borrows a black tie and armband from a friend.

• Meursault sleeps on the early afternoon bus to the village where his mother had lived in a retirement home.
• The caretaker of the nursing home meets Meursault and shows him to the morgue.

• Meursault declines the caretaker's offer to remove the coffin lid so he can view the body.

• Because of the heat, Perez falls...

The Stranger from BookRags. (c)2022 BookRags, Inc. All rights reserved.