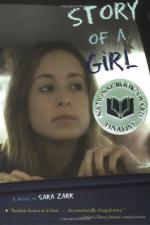 Sara Zarr
This set of Lesson Plans consists of approximately 137 pages of tests, essay questions, lessons, and other teaching materials.

Deanna finally speaks her mind to Tommy and to her father. There is clearly the sense here that Deanna is becoming both stronger and more courageous, less self-pitying (a state that some of her journal entries and narration tend to suggest) and less willing to both perceive herself as, and act as, a victim. She is, in short, clearly both ready and willing to move on from her past, a situation that is clearly a contrast to both Darren and her father, and which, as later events confirm, serves to inspire both of them to at least a degree of both letting go and moving on. Deanna is, in short, both a hero in her own life and, as a result, an inspiration in the lives of others.

1. Discuss the ways in which Deanna seems to be changing after speaking her mind to Tommy. Use examples...

More summaries and resources for teaching or studying Story of a Girl.

Story of a Girl from BookRags. (c)2022 BookRags, Inc. All rights reserved.