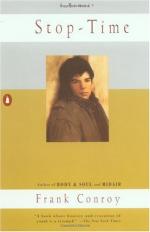 Frank Conroy
This set of Lesson Plans consists of approximately 114 pages of tests, essay questions, lessons, and other teaching materials.

• The prologue describes the author's generally peaceful and productive country life in England.

• The author then describes recollections of his father being in and out of mental hospitals while he was growing up.

• His father died from cancer when he was 11.
• Most of this chapter is taken up with the author's recollections of events at his boarding school, Freemont, in Pennsylvania.

• He describes a mock trial of a boy named Ligget, who was charged for being a racist.

• The boys of the school held a mock trial and Ligget was found guilty.

• His punishment was to be punched by each of the 40 boys.
• Ligget did not return to school and suffered from a broken jaw; the boys were never punished.

• The last section of the chapter is brief and describes a sleepless night.

• The author cannot distinguish between memory and present existence.
• The body...