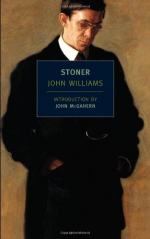 John Williams
This set of Lesson Plans consists of approximately 108 pages of tests, essay questions, lessons, and other teaching materials.

1. How is William's early life on his family farm described for the first time in the book?

William's early life on his family farm is first described as him being born on a farm in Missouri where he went to college and taught English and later died in obscurity never leaving a lasting impression on anyone.

2. How does William learn about the new agriculture program at the University of Missouri?

William learns about the new agriculture program at the University of Missouri after a local county official told his father about it and his father encourages William to enroll.

3. Why does William's father want him to study agriculture in college?

William's father wants him to study agriculture in college because farming had become more difficult in the past years and he thought it would be useful to see what the university could teach him.