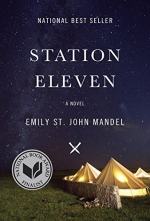 Imagine you are a casting director for a film adaptation of Station Eleven. Whom would you cast in the major roles? Why?

Create a map that shows the journeys of the Traveling Symphony in Station Eleven as well as the other settlements and camps in the narrative.

Look in your local newspaper or archives for an article that involves some aspect of the novel and bring it to class. You will present it in front of the class and explain how it relates to the novel.

Write an obituary for one of the characters in Station Eleven. For what attributes would this character be remembered?

Draw your interpretation of a character from the novel. How does this character dress...