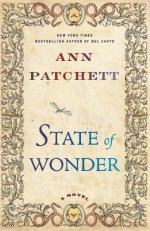 • Marina Singh learns of the death of her co-worker, Anders Eckman by a letter from Brazil two weeks after his death.

• Jim Fox, the CEO of Vogel, the pharmaceutical company where Marina works comforts her and laments sending Jim to the jungle.

• Jim was sent to check on Dr. Swenson, a former professor of Marina's, who is at a research project in an undisclosed village.

• Marina and Fox tell Karen Eckman, Anders' wife of his death. Marina is upset that Fox made her tell Karen and asks to go home.

• Fox drives to a restaurant instead and tells Marina that Dr. Swenson has avoided any contact for several months.
• Fox then admits they have heard nothing for two years from Swenson. He tells her that he is sending her to Brazil.

• Marina is not happy with his decision but he insists she is the only person...