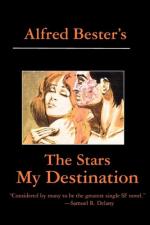 Alfred Bester
This set of Lesson Plans consists of approximately 119 pages of tests, essay questions, lessons, and other teaching materials.

1. What type of vehicle does Fourmyle arrive at Presteign's New Year's party in?
(a) An Edison electric runabout.
(b) A steam locomotive pulling a single observation car.
(c) A glass-topped Greyhound bus.
(d) A band wagon.

2. What does Presteign explain that PyrE is?
(a) A Phoenix alloy.
(b) A nuclear alloy.
(c) A pyrophoric alloy.
(d) A pyrotechnic alloy.

3. What does Foyle use to control the reappearance of his tattoos?
(a) Yoga.
(b) Sedatives.
(c) Cold baths.
(d) Self-hypnotism.

4. Who is Ben Forrest?
(a) A member of the Four Mile Circus.
(b) The lieutenant governor.
(c) A spaceman from the Vorga.
(d) A dignitary at the Government House Ball.

7. What location is considered the center of corruption in Rome?
(a) The Coliseum.
(b) The Parthenon.
(c) The Spanish Stairs.
(d) The Arch of Triumph.

8. According to Kempsey, why wasn't the Vorga able to rescue Foyle from the Nomad?
(a) The Vorga was low on oxygen.
(b) The Vorga was carrying refugees.
(c) The Vorga crew had threatened mutiny.
(d) The Vorga determined there was no life onboard the Nomad.

9. What does Fourmyle do with the old St. Patrick's Cathedral in New York?
(a) He uses it to house his circus.
(b) He uses it as a compound for people he has kidnapped.
(c) He sells it to Presteign.
(d) He uses it as a hangar for his vehicles.

10. What is the name of the condition in which perception receives messages from the world, but sensory perceptions are confused with each other?
(a) Amnesia.
(b) Synesthesia.
(c) Precepthesia.
(d) Proclesia.

12. How do Dagenham and company tell Foyle to save himself in the ruins of Old St. Pat's?
(a) They tell him to listen to what Jiz tells him.
(b) They offer him a fireproof suit.
(c) They tell him to jaunte.
(d) They show him the opening of a non-collapsed tunnel.

13. What does Y'ang-Yeovil identify Robin as when she visits him in Central Intelligence headquarters?
(a) An Alien Spy.
(b) An Alien Belligerent.
(c) An Alien Informer.
(d) An Alien Conspirator.

14. Why does Fourmyle send small slugs of PyrE around the world?
(a) So others could determine what PyrE was and what it could do.
(b) To hide as much PyrE from Presteign as possible.
(c) To use PyrE in the same fashion as an IED.
(d) To plan for future destruction.

1. What does Orel die from?

4. What job does Foyle ask Robin to take for him at the end of Chapter 11?

5. Where does the Government House ball at the opening of Chapter 9 take place?

More summaries and resources for teaching or studying The Stars My Destination.

The Stars My Destination from BookRags. (c)2022 BookRags, Inc. All rights reserved.