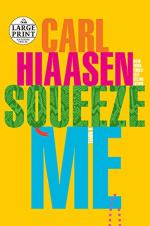 Objects & Places from Squeeze Me

Carl Hiaasen
This set of Lesson Plans consists of approximately 142 pages of tests, essay questions, lessons, and other teaching materials.

These animals symbolize danger and evil as archetypes in literature and legends, but in reality, they are most often quite harmless to humans.

These rare items that make expensive jewelry are a symbol of excess, and for several characters in the novel they are harbingers of bad luck.

This lush habitat exhibits some of the worst problems with climate change and the destruction of the natural environment.

These characters embody entitlement and the stereotypical "spoiled brat" mentality.

This object symbolizes Angie's passion and temper, as it is the result of the crime she committed that made her a convicted felon.

This grotesque object symbolizes the unhinged and rogue nature of one character's mentality, as well as the extreme lengths the character will...

More summaries and resources for teaching or studying Squeeze Me.

Squeeze Me from BookRags. (c)2021 BookRags, Inc. All rights reserved.