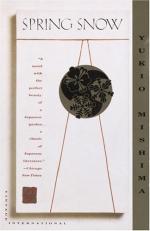 4. How does Honda help Kiyoaki with Satoko in "Chapter 34"?
(a) He promises to keep the affair a secret.
(b) He secures the perimeter of the villa.
(c) He loans Kiyoaki money.
(d) He borrows a friend's car for them to use.

5. How does Tadeshina try to kill herself?
(a) Poisoning her food.
(b) Drinking alcohol.
(c) By jumping off a bridge.
(d) With sleeping pills.

8. What does the count talk to Satoko about at Gesshu Monastery in "Chapter 47"?
(a) Current events.
(b) Her returning home.
(c) Kiyoaki.
(d) The emperor and the prince.

9. Where do Kiyoaki and Satoko have secret meetings while she is engaged to someone else?
(a) Tokyo.
(b) Krisada.
(c) China.
(d) A mountainous countryside.

10. Why does Chao P decide to return to Siam?
(a) Because his brother is getting married.
(b) Because he's failing school.
(c) Because his uncle is sick.
(d) Because his ring was stolen.

11. What does the countess talk to Satoko about at Gesshu Monastery in "Chapter 47"?
(a) Her wedding plans.
(b) Her returning home.
(c) Kiyoaki's parents.
(d) Current events.

13. What does Kiyoaki say leaves with the two Siamese princes?
(a) His honesty.
(b) His companions.
(c) His childhood.
(d) His love.

15. How does Kiyoaki respond when his school mates ask about Satoko's called off engagement in "Chapter 48"?
(a) He says little.
(b) He yells at them.
(c) He cries.
(d) He walks away.

1. What does Tadeshina call Satoko's pregnancy in her letter in "Chapter 39"?

2. What worries Kiyoaki's father most about his affair with Satoko and her pregnancy?

3. How does Kiyoaki feel when he first thinks about attending college?

4. In "Chapter 36," who is always present with Satoko when she and Kiyoaki meet?

5. What confuses Honda about Kiyoaki's passion in "Chapter 53"?