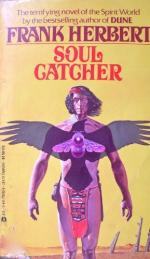 Frank Herbert
This set of Lesson Plans consists of approximately 135 pages of tests, essay questions, lessons, and other teaching materials.

3. What is the name of the man who strikes up a conversation with Charles in Section 5?
(a) Vince.
(b) William.
(c) Michael.
(d) Brandon.

4. What does Charles think about as he leads David into the woods?
(a) How famous he will soon be.
(b) David's family.
(c) The running bear.
(d) His sister.

5. What prompts Charles to wonder if David is hungry in Section 5?
(a) He looks at his watch.
(b) He sees a bird.
(c) He, himself, is hungry.
(d) He hears David's stomach growling.

6. How does David feel when he awakens after he and Charles first stop to rest?
(a) Hungry.
(b) All of the answers are correct.
(c) Parched.
(d) Frightened.

7. In Section 4, what does Charles tell David that mistakes will cause?
(a) A lifetime of misery.
(b) Instantaneous death.
(c) David to be buried alive.
(d) Regret and self-loathing.

8. In Section 1, where is the father of the boy who has been kidnapped going?
(a) To the Grand Canyon.
(b) To his summer house.
(c) To Six Rivers Camp.
(d) To Washington state.

9. What did David do after the television broadcast showing his father?
(a) Excitedly bragged to his friends.
(b) Went for a swim.
(c) Celebrated with friends.
(d) Wrote a long letter to his parents.

10. What does David's mother recall doing with him the morning he leaves for camp?
(a) Fighting.
(b) Eating.
(c) Walking.
(d) Singing.

13. What is Charles doing in Section 6 that makes David think he is crazy?
(a) Talks to unheard voices.
(b) Chants continuously.
(c) Argues with himself.
(d) Prays to animals.

15. What does the FBI agent believe Charles's state of mind to be?
(a) Psychopathic.
(b) Stubborn.
(c) Deranged.
(d) Psychotic.

1. What gives David confidence when Charles leads him into the woods?

2. What irritates David's mother the morning he leaves for camp?

3. What ceremonial clothing does Charles bring for the event to take place in Section 3?

5. What is the name of the alleged kidnapper?

More summaries and resources for teaching or studying Soul Catcher.