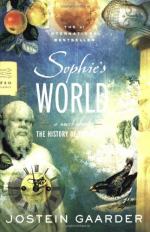 Jostein Gaarder
This set of Lesson Plans consists of approximately 134 pages of tests, essay questions, lessons, and other teaching materials.

1. Where do Sophie and Joanna camp?
(a) The lake house.
(b) Their school's playground.
(c) The Grouse top.
(d) Joanna's backyard.

4. What is 'Plato's Dialogues'?
(a) Lectures that Alberto follows.
(b) A form of debate.
(c) Plato writing down the words of Socrates.
(d) A one-man play about philosophy.

5. What does Empedocles believe plays a role in bringing things together?
(a) Communication.
(b) Love.
(c) Technology.
(d) Health.

6. Why is Thor a powerful God?
(a) Animals behave because of him.
(b) He provides fire.
(c) He gives people rain.
(d) People pray to him when they are lost.

7. What does Plato believe human beings get caught in?
(a) Confusion over Gods.
(b) Work and money struggles.
(c) Abuse and neglect of the young.
(d) The darkness of day-to-day perception.

8. What does the note say inside Sophie's second envelope?
(a) How will you help Earth today?
(b) Where does the earth come from?
(c) Why are we here?
(d) What should your life be?

10. In continuing her search for the philosopher, what path does Sophie take?
(a) The shortcut through town.
(b) The path Hilde described on a postcard.
(c) The path Hermes took.
(d) The path her mother told her about.

11. When Sophie confides in Alberto about her discovery after her dream, how does Alberto react?
(a) He cries.
(b) He slams a door.
(c) He says nothing.
(d) He says it is a cheap trick.

13. How does Sophie surprise Joanna after they finish classes?
(a) Joanna tries to make weekend plans, but Sophie ignores her and hurts her feelings.
(b) Sophie attempts to coerce Joanna into cheating with her on a test.
(c) Sophie admits to skipping school to read her new book.
(d) Sophie is so intrigued by Philosophy that she does not want to play cards or badminton.

14. What guise does Sophie arrange so she can meet Alberto in person?
(a) She spends the night at Joanna's house.
(b) She joins a church.
(c) She has activities after school.
(d) She goes to a movie theatre.

15. What comprises Sophie's myth?
(a) A Prince rescues a Princess.
(b) A genie comes to grant wishes.
(c) A monkey becomes her tour guide in life.
(d) A small child pops out of a flower.

2. What is the Baroque period known for?

3. What are the teacher's thoughts concerning Sophie's religious exam?

4. Sophie dreams about Hilde's golden crucifix and then wakes to be startled by what?

5. After Sophie returns home from meeting Alberto, what does she see in the mirror?