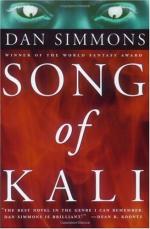 1. What application was denied to Krishna?
(a) A job at the museum.
(b) Dual citizenship.
(c) The Writer's union.
(d) A library member.

2. What bothers Chatterjee about Bobby getting the manuscript?
(a) He was not given a duplicate.
(b) He did not get to look at it first.
(c) He did not see Das.
(d) He was not in control of the situation.

1. What work does Bobby find stimulating at the end of the book?

2. What gift does Das give Bobby?

3. What does Tagore think his life is meant to do?

4. What has Tagore's house been turned into?

5. What study of Stephen Hawking does Amrita study?

1. How does Das discuss the Song of Kali in his manuscript?

2. What happens to Bobby's marriage after Victoria's death?

3. What kind of hoops does Bobby have to jump through to get Victoria's body home?

4. What does Amrita not allow while Victoria is missing?

5. What does Bobby to to overcome the darkness of Kali when he is with Amrita?

6. What monetary advice does the rickshaw driver give to Amrita?

7. How do the Parsees dispose of their dead, and why?

8. How is Kali born according to Das' manuscript?

9. How does Bobby feel about Calcutta after leaving Das, and why is this so strange?

10. What does Bobby do when he gets to the Calcutta Airport alone?