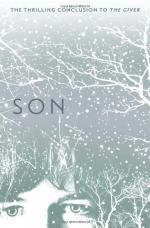 This character is the infant around which the narrative revolves. When this character's mother finally finds him again, he is in his adolescence. This character is at first unaware that the old woman who always seems to be observing him is his mother, so he continues his plan of building a boat in order to seek out his birth mother.

This character is the protagonist's older brother who as a preteen, is assigned to the department of Law and Justice, a prestigious appointment within the community. This character's parental units are proud of him, while...