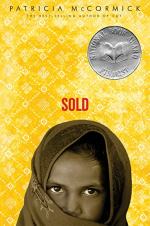 Patricia McCormick
This set of Lesson Plans consists of approximately 130 pages of tests, essay questions, lessons, and other teaching materials.

2. Whose shoulder does Lakshmi rest her head on as she watches television in "Like Anita"?
(a) Anita's.
(b) Monica's.
(c) Shahanna's.
(d) Pushpa's.

3. Why has Monica been thrown out of Happiness House in "No Remedy"?
(a) She has contracted HIV.
(b) She is pregnant.
(c) She has stolen money.
(d) She has been caught smoking.

4. What does the tea vendor gain in exchange for putting extra sugar in the cook's tea at Happiness House?
(a) A pat on the head.
(b) A rupee.
(c) A bowl of rice.
(d) A stale heel of bread.

5. What does Mumtaz say she will do to Lakshmi if she tries to run away in "Changes"?
(a) Beat her with a metal rod.
(b) Rub hot chilies in her private parts.
(c) Drown her in the river.
(d) Hang her by her fingernails.

8. Who is the coughing woman that shares a room with Lakshmi at Happiness House?
(a) Anita.
(b) Shilpa.
(c) Pushpa.
(d) Anna.

9. What is described as the "most important button" in "Remote Control"?
(a) The volume button.
(b) The mute button.
(c) The channel button.
(d) The red button.

10. What television show is the favorite of the girls at Happiness House?
(a) The Bold and the Beautiful.
(b) One Life to Live.
(c) Jeopardy.
(d) Who Wants to be a Millionaire.

13. What does Lakshmi describe "Stealing from the David Beckham Boy" in the chapter with this title?
(a) His pencils.
(b) Glimpses in his storybook.
(c) His money.
(d) A rag doll.

1. What is lassi made from?

2. What does Monica say her father needs when she returns to Happiness House in "The Living Dead"?

3. Who did Monica give a bottle of nail polish to last week, according to the narrator in "Understanding Monica"?

4. What does Monica give to Laskhmi in "Instead of Haresh"?

5. How much money does Shahanna say Mumtaz charges the girls for their daily rice and dal?