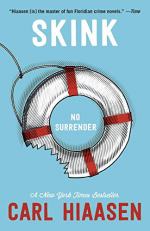 Carl Hiaasen
This set of Lesson Plans consists of approximately 112 pages of tests, essay questions, lessons, and other teaching materials.

3. What is Trent watching at the beginning of Chapter 6?
(a) Bigfoot Uncensored.
(b) Gold Rush.
(c) Alaska Homesteading.
(d) Sasquatch Returns.

9. In Chapter 4, how many stories about unidentified bodies has Richard read since Malley has been gone?
(a) Four.
(b) Two.
(c) Three.
(d) Five.

11. How long before Malley ran away was Marine Corporal Talbo Chock buried?
(a) Two weeks.
(b) About a week.
(c) A month.
(d) Two months.

12. In Chapter 6, how long does it take Richard to pack his things after Trent gives permission for a camping trip?
(a) 15 minutes.
(b) Three minutes.
(c) Five minutes.
(d) Ten minutes.

13. What does Skink have Richard pick up off the road toward dinner time in Chapter 6?
(a) Old suitcase.
(b) Duffel bag.
(c) Dead raccoon.
(d) Dead armadillo.

1. What is the name of the couple Richard and Skink meet in Chapter 10?

2. In Chapter 1, how long does Richard say it has been since his father died?

3. What type of vehicle did Malley get into at the Orlando airport on the night she pretended to fly to New Hampshire?

4. How many miles does Clint Tyree say that he has walked from Lauderdale on the beach?

5. When Malley has run away before, what is the longest she has stayed away?