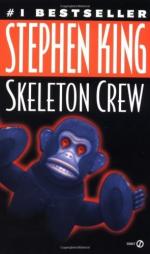 Stephen King
This set of Lesson Plans consists of approximately 131 pages of tests, essay questions, lessons, and other teaching materials.

• The introduction involves Stephen King explaining the methods to the madness of his creative process.

• He uses the "I Guy" as the main character upon which he develops his plot and builds his supporting characters.

• He likes to write his stories with a "wouldn't it be funny if" beginning.

• The introduction is based on a conversation with a friend who compares the pay King receives for one of his short stories to that of a New York plumber.
• A thick fog rolls in off Long Lake after a severe thunderstorm, and the post-storm cleanup requires a disgruntled neighbor to beg a ride to town with David and his five year old son, Billy.

• The group stops at the grocery store where several other citizens are shopping.

• The fog becomes more dense, and soon the people in the grocery store become aware that the fog is...

More summaries and resources for teaching or studying Skeleton Crew.