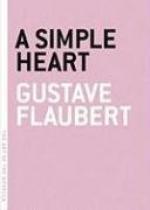 Gustave Flaubert
This set of Lesson Plans consists of approximately 141 pages of tests, essay questions, lessons, and other teaching materials.

• FÃ©licitÃ© is introduced as an extraordinary maidservant under Mme. Aubain.

• Mme. Aubain is introduced as a widow who was forced to sell off nearly all of her property after her husband died, leaving her and her two children in significant debt.

• Mme. Aubain's house is described as small and unassuming, but with furniture and belongings left over from better, more affluent days.

• FÃ©licitÃ© is described as appearing ageless, wasting nothing, always looking out for Mme. Aubain's interests, and wearing the same clothes year round.

• FÃ©licitÃ©'s parents die while she is very young and her first job is on a farm where she is beaten and eventually dismissed due to a false allegation of theft.

• When FÃ©licitÃ© is a bit older, she meets a young man named Theodore who leads her on by telling her he wants to marry her, but eventually...