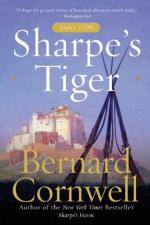 1. Why does Sharpe ignite the fuse of the mine?
(a) So it will explode before the British arrive.
(b) He does not.
(c) So to burn off the fuse so the mine cannot be lit.
(d) So the British can find them after seeing the explosion.

2. Where will all the British cannons be concentrated once the enemy's cannons are taken out where the British plan to enter the city?
(a) They will probably not fire anymore since they have limited ammunition.
(b) In the front as a diversion.
(c) Where they need to open up a wall.
(d) They have not decided yet.

3. What are the British doing in the woods?
(a) Fighting.
(b) Cutting trees for siege machines.
(c) Setting up traps.
(d) Setting fire to the trees.

4. What does Sharpe discuss with Lawford and McCandless?
(a) The tiger.
(b) The kegs of powder.
(c) The British situation.
(d) The pile of rockets.

7. Why can't Gudin help Sharpe?
(a) Sharpe has admitted his role.
(b) Sharpe is Tippoo's prisoner.
(c) He can help them if he wants.
(d) It would cross the bounds of what an advisor is to do.

13. What do the British troops do at the end of this chapter?
(a) File into the network of trenches.
(b) Eat a hearty meal.
(c) Write letters home.
(d) Sit and wait in formation.

14. Why does Tippoo give Sharpe something?
(a) To hold Sharpe's loyalty.
(b) To make Gudin jealous.
(c) To motivate Lawford.
(d) Because Sharpe is instrumental in the capture of a British squad of soldiers.

1. What does Tippoo decide to do with Sharpe and Lawford?

2. Where do the British open fire?

3. What is Sharpe ordered to do after reaching the British?

5. Why are the Forlorn Hopes so named?