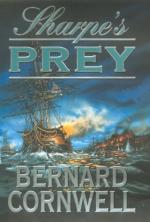 Bernard Cornwell
This set of Lesson Plans consists of approximately 140 pages of tests, essay questions, lessons, and other teaching materials.

1. What do the British do after launching exploding bombs?
(a) Send in a letter of truce.
(b) Wait to see what the Danes do.
(c) Send projectiles designed to start fires.
(d) March on the city.

3. What does Sharpe tells his men to do?
(a) Go report to Wellesley.
(b) Stay with Astrid.
(c) Kill anyone in Lavisser's house.
(d) Return to the British front line.

4. About what does Barker reassure Lavisser?
(a) That Peyman would believe Lavisser over a British soldier.
(b) That the intruder was probably a common thief.
(c) That he and Lavissier will be far gone before anything happens.
(d) That the Crown Prince will be as charmed by Visser as every other man.

1. What does Sharpe ask the person to whom he introduces himself?

2. What does Sharpe say about Skovaard?

3. What does Astrid ask Sharpe to do after questioning Bang?

4. With what is Skovaard getting annoyed?

5. Where is the rest of the Danish army?

1. Who does Sharpe see sleeping on a chair and how does he deduce who she is?

2. Describe the encounter between Sharpe and Barker.

3. Describe the conversation among Sharpe, Captain Gordon and Pumphrey.

4. Describe the interaction between Captain Dunnett and Sharpe.

5. Where does Sharpe go with Astrid and how does it affect him?

6. What is the conversation between Lavisser and Barker about the damage to Lavisser's house?

7. Describe the interaction between Sharpe and Bang at the end of this chapter.

9. Who takes a liking to Sharpe among the Danish citizens and how does Sharpe save the man's life?

10. What does Sharpe give Jems and tell him to do?

More summaries and resources for teaching or studying Sharpe's Prey: Richard Sharpe and the Expedition to Copenhagen, 1807.