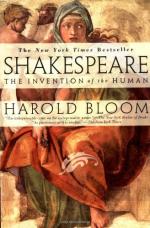 Shakespeare: The Invention of the Human Test | Mid-Book Test - Easy

Harold Bloom
This set of Lesson Plans consists of approximately 111 pages of tests, essay questions, lessons, and other teaching materials.

2. For what reason does Hal curse Falstaff in "Henry IV"?
(a) For corrupting his youth.
(b) For debasing his character.
(c) For inconsistency.
(d) For losing the throne for him.

3. What did Shakespeare create with pain, in Bloom's interpretation?
(a) Memory.
(b) Poetry.
(c) History.
(d) Culture.

5. What does Bloom say writers began to write after Shakespeare?
(a) Characters with inner lives.
(b) Tragicomedies.
(c) History plays.
(d) Characters who lived a world with modern weaponry.

6. Whom do Antipholus and Dromio discover when they arrive in Ephesus, in "Comedy of Errors"?
(a) Their wives.
(b) Their servants.
(c) Their master.
(d) Their long lost twins.

10. How does Bloom characterize the end of "Richard III"?
(a) Repetitive.
(b) Disorganized.
(c) Symphonic.
(d) Fulfilling.

11. How does Bloom characterize characters like Hamlet and Falstaff?
(a) Pure fiction.
(b) Creations of language itself.
(c) Purely literary.
(d) Larger than life.

14. How does Bloom characterize the marriage between Beatrice and Benedick?
(a) Ideal.
(b) Sufficient.
(c) Pragmatic.
(d) Flawed.

1. Bloom describes a Nietzschean tendency toward what, in "Twelfth Night"?

2. What complicates the action of "Two Gentlemen of Verona", according to Bloom?

3. What upsets Bloom about the ending of "The Merchant of Venice"?

4. What does Bloom say is King John's biggest problem?

5. Which critic is NOT a 'romantic' critic?