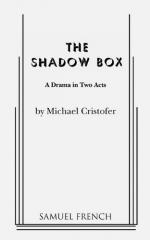 Michael Cristofer
This set of Lesson Plans consists of approximately 112 pages of tests, essay questions, lessons, and other teaching materials.

Agnes - This character is described as a middle-aged woman who is very neat, very tense and very tired.

Beverly - This character is a surprise guest at Cottage Two, a world traveler, an adventurer, and a bit of a drunk.

Brian - This character has come to terms with his past and in doing so, his universe has opened up.

Felicity - Described as being sixty or seventy and wheelchair bound, this character is surprisingly feisty, if not somewhat senile, and openly hostile to both the interviewer and her daughter.

Interviewer - This character definitely works for the hospital and appears to be a clinician.

Joe - This character is a terminally ill patient and resident of Cottage One, speaking to the interviewer.

Maggie - Amid a mass of bundles, shopping bags and suitcases, this character approaches the cottage, dressed up yet looking a...