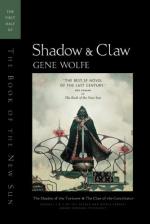 Gene Wolfe
This set of Lesson Plans consists of approximately 121 pages of tests, essay questions, lessons, and other teaching materials.

• Severian is recalling an event from his youth in which he and other boys from his guild, all torturer apprentices, were at the gate of a graveyard.

• The boys sneak in, hear a commotion and hide; Severian sees two men and a woman, Thea, digging up a body.

• Though he is forbidden to help, Severian rescues one man named Vodalus, from the attacking guards.

• Vodalus, the leader of a resistance group, gives Severian a gold coin.

• Severian and the boys swim across the river on their way home and Severian is caught up in the weeds and begins to drown.

• A woman in the water pushes Severian to the surface and his friends pull him out by his hair.
• The guild in which Severian lives does not pass judgment on those brought to them; they refer to those people being tortured as clients.