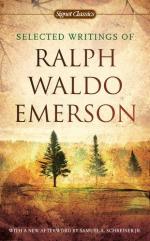 1. What contemporary of Emerson's can be seen in his poem "Uriel"?

2. What was Napoleon's opinion of inherited monarchy?

3. On what day did Emerson deliver "Emancipation in the British West Indies"?

4. What word does Emerson use to describe Napoleon's intellect?

5. What is the "ill-fated, much-injured race," according to "The Emancipation Proclamation"?

1. What three things does Emerson say Thomas Carlyle was?

3. Why did Emerson write "Abraham Lincoln"? How did New Englanders feel about this?

5. In what three ways do geniuses maintain their distance from others?

7. What does Emerson think of slavery, according to "Emancipation in the British West Indies"? What challenge does he issue in his essay?

8. Explain how society and solitude are both necessary for people, according to "Society and Solitude".

9. What dichotomy in Carlyle does Emerson explain in "Carlyle"?

10. What does Emerson think of Daniel Webster? Why?

Explain Emerson's view of the rite of communion in Christianity. Include the Biblical evidence he uses in his essay, "The Lord's Supper", to support your claims.

Explain transcendentalism, focusing on Emerson's expressions of it in "Selected Writings of Ralph Waldo Emerson".

Explain the role of nature in Emerson's writings.