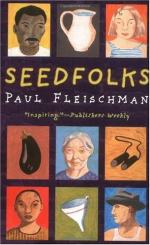 Paul Fleischman
This set of Lesson Plans consists of approximately 116 pages of tests, essay questions, lessons, and other teaching materials.

Draw an image of the garden, as it would have appeared by the middle of the story, when individuals began adding their own, homey touches.

Write a love poem from Curtis to Lateesha, explaining how he has changed.

Pretend you are working to have Sam elected as mayor. Write a campaign slogan for him that depicts his work in the community.

Draw a character tree, beginning with the base of Kim, that shows how each character relates to another. So, you would begin with links from Kim to Ana, from Ana to Kim and Wendell, and so forth.

Hold you own class water contest. Divide the class into groups and have each brainstorm for a better watering solution in the garden.

Choose your favorite character, and write a biography for them, based on information presented in...