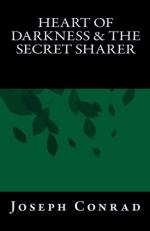 Joseph Conrad
This set of Lesson Plans consists of approximately 250 pages of tests, essay questions, lessons, and other teaching materials.

1. What does the captain watch leave once on board the ship?

2. What could potentially cause tension and frustration between the crew and their new captain?

3. When found with Legatt, how does the murdered person look?

4. What does the captain bring Legatt as he boards the ship?

5. What bizarre, mysterious inquiry does the stranger make without being explicitly quoted in the text?

1. How does the captain attempt to distract the skipper once the skipper starts to become suspicious?

2. What strangeness is dominant in the mind of the captain in the story's early part?

3. Why does the captain choose to take Legatt to his quarters rather than the brig or the crew's quarters?

4. How does the captain describe the situation in which he first finds himself truly in command of the ship?

5. Why does the mysterious stranger see himself being tried by a judge and jury something of an absurdity?

6. How does the unnamed captain comport himself towards the Sephora's skipper?

7. How does the skipper of the Sephora characterize Leggatt in regards to his position as chief mate?

8. How does the captain describe the state of Leggatt during the exodus from the gulf?

9. How does the captain describe his own situation aboard the unnamed ship in speaking to the stranger?

10. Where is Legatt discovered by the crew of the Sephora with the murdered man? What happens when they found?

There are many ways that the captain could react to discovering Legatt. Compare some of the possible, even typical, responses you would expect from a ship's captain to the way that the captain did handle the situation. What reasons does the author give the reader for the captain's actions/reactions?

In the last sentence of the book, the captain narrates that Leggatt "had lowered himself into the water to take his punishment." Compose an essay which carefully examines the manner in which Leggatt is punished. The captain helps the other man - but to what end? Does it seem a fitting punishment for Leggatt to be marooned, stranded, and cast into another society? Is this punishment enough? Is it too much? What were the available alternatives of punishment that might have awaited him in England? What good will such a punishment do?