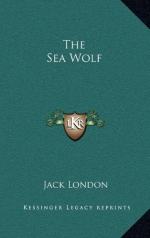 He is known throughout by several appellations. He was born around 1858 and is thirty-five years old when the events described in the novel take place. He spent his entire childhood and adolescence involved in scholarly education and eschewed any sports or other physical activities. His extremely frail physique and total lack of boyishness earned him the nickname "Sissy."

He was born aboard a ship at sea about a hundred miles from Romsdal Fiord in Norway. His birth year is not noted but was probably near the mid-1800s as he is apparently roughly the same age as Humphrey Van Weyden. His parents were poor sailors, and he has at least one brother - the ominously named Death. He became a cabin boy at age twelve, ship's boy at fourteen, ordinary seaman at sixteen and able seaman at seventeen. His early shipboard life was apparently...