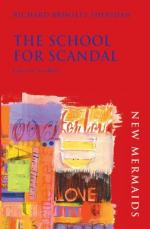 1. Whom does Maria believe to be having an affair with Charles?
(a) Mrs. Candour.
(b) Miss Clackitt.
(c) Lady Teazle.
(d) Lady Sneerwell.

2. What does Sir Oliver see beneath Charles's exterior?
(a) Dishonesty.
(b) More dissipation.
(c) A drunk.
(d) Nobility.

8. In essence, what does Trip offer Mr. Moses?
(a) Some sound, practical advice about how to earn respect in the township.
(b) Some stolen goods in the form of clothes that belong to Charles.
(c) His unsolicited opinion on Renaissance art.
(d) A world of information on how to eat well for very little money.

10. What does Trip offer Mr. Moses?
(a) A plump, juicy steak with all the trimmings.
(b) Directions to Lady Sneerwell's house.
(c) Some of his clothes.
(d) Some of Charles Surface's clothes.

11. How does Sir Oliver see Charles to be beneath the surface during and after the portrait auction?
(a) Selfish.
(b) Noble.
(c) Conniving.
(d) Intelligent.

13. What is Sir Oliver pleased to hear when Charles explains why he is not willing to sell his uncle's portrait for a large sum of money?
(a) That Lady Sneerwell has invited him to a gossip session.
(b) That Joseph will be joining him for dinner.
(c) That Charles holds him in high regard.
(d) That Mrs. Candour has embroidered a handkerchief for him.

1. How much money does Charles make on the sale of the portrait that Sir Oliver had shown interest in buying?

2. What type of stories has Mr. Moses heard about Charles prior to the auction?

3. Who is Sir Peter aiming to eavesdrop on?

4. Who do Mrs. Candour, Lady Sneerwell, Backbite, and Crabtree believe was caught with Lady Teazle?

5. What does Sir Peter do when he spots Mrs. Candour, Lady Sneerwell, Backbite, and Crabtree at his house?