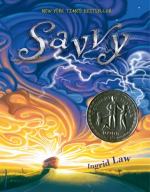 Ingrid Law
This set of Lesson Plans consists of approximately 100 pages of tests, essay questions, lessons, and other teaching materials.

1. What does Miss Rosemary want to plan, though the others think it may be a bad idea?
(a) Poppa's birthday.
(b) Momma's birthday.
(c) Mibs' birthday.
(d) A coming home party.

3. What did Grandpa make for Momma and Poppa once it was clear they were going to be married?
(a) A child.
(b) A new home.
(c) Six acres of land.
(d) A diamond ring.

5. In what town does Mibs decide to move away from the group in order to avoid the talking tattoos?
(a) Salina.
(b) Bee.
(c) Topeka.
(d) Meadowville.

2. What happens as a result of Rocket's savvy coming on during his birthday party?

3. What is the name of Lester's ex, the one that is tattooed on his arm?

4. Who arrives to ask Mibs about the sudden storm that took place when they were on the bus, according to the story?

5. Who hopes no one will attend the party that Miss Rosemary is planning?

1. What was the savvy of Grandpa that was displayed during Rocket's thirteenth birthday, according to the book?

2. What does Bobbi's tattoo reveal to Mibs as she is formulating the plan, according to the book?

3. What does Fish do when he hears that Mibs is yelling at Will to stay away, according to the book?

4. What causes Lill to ask if the bus the children are on is a bus for misfit children, according to the book?

5. What does the family find out during a phone call in the middle of dinnertime, according to the book?

6. What happened as a result of Fish receiving his savvy when he turned thirteen, according to the book?

7. What does the family think is a bad idea, though they don't say anything about it, according to the book?

8. What are the thoughts that keep Mibs awake at night during the story?

9. What is the special event for which Mibs is waiting in the first few pages of the story?

10. What does Mibs begin to worry about as she continues to hear things from others around her?

More summaries and resources for teaching or studying Savvy.