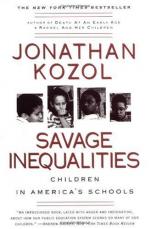 Jonathan Kozol
This set of Lesson Plans consists of approximately 156 pages of tests, essay questions, lessons, and other teaching materials.

4. According to Bonita Brodt, a writer for the Chicago Tribune, who is the president in the textbooks that the students are reading at Goudy Elementary School?
(a) Ronald Reagan.
(b) Richard Nixon.
(c) George H. W. Bush.
(d) John F. Kennedy.

1. What reason did the Post-Dispatch give for the evacuation of Martin Luther King Junior High School in the early spring of 1989?

2. Why does Du Sable High School's principal have a hard time retaining young teachers at his school?

3. In what year did Kozol set off to visit schools and speak with children about education in urban areas?

4. How many years did Kozol spend visiting schools and speaking with children about their schools and neighborhoods?

5. How did Carla Hawkins, the teacher of a combination fifth and sixth grade class, acquire all the materials and resources for her class?

2. How did East St. Louis become so poor?

3. Why are the major industries that dump waste into East St. Louis not taxed there?

4. Where does Kozol go on his journey to speak with students in the public school system? How does Kozol choose the schools that he visited?

6. Why does Kozol condemn business leaders and legislators for not improving public education?

9. What problem exists at Lathrop Elementary School, and what is the source of this problem?

10. What reasons does Irl Solomon give for young teachers not staying at Martin Luther King Jr. High?