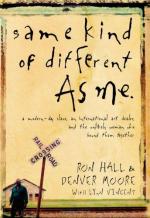 Same Kind of Different as Me: A Modern-Day Slave, an International Art Dealer, and the Unlikely Woman Who Bound Them Tog… Quiz | Four Week Quiz B

This quiz consists of 5 multiple choice and 5 short answer questions through Chapters 52 to 62.

1. In Chapter 13, Denver looked back on life as a sharecropper. How did he feel at age 18 in a 2-room shack with a bed, table, stove and an outhouse?
(a) Like things were okay and he would survive.
(b) Like he was living "high on the hog."
(c) That he was at a dead-end.
(d) That things could only get better.

2. What thoughts about the homeless did Ron have as he flew in a private jet over Fort Worth and looked down on the city?
(a) He was grateful that there were no homeless people begging on the streets of Fort Worth.
(b) He was heartbroken for the future of the homeless.
(c) He had sympathy because he used to be homeless.
(d) He was pleased that the city was moving the homeless so they would not bother him anymore.

3. What valuable objects were in Ron's possession on the private jet?
(a) Two rare Picasso sculptures.
(b) $100,000 in cash and two bars of gold.
(c) Three Georgia O'Keefe paintings.
(d) Three Monet landscapes.

4. What was Dr. Goldstein's diagnosis?
(a) Denver had only a few months to live.
(b) Ron and Deborah should get a divorce.
(c) No treatment because the cancer had advanced too far.
(d) Antibiotics to stop the infection.

5. Why did Ron begin to worry about Denver in Chapter 37?
(a) Because Deborah was sure Denver was dead.
(b) Because he failed to arrive in Colorado on time.
(c) Because Ron began to fear he was robbed.
(d) Because he did not return anyone's phone calls.

1. What did Denver want most from the volunteers?

2. What special event did Deborah start for the needy women?

3. What did the white woman stranded with car trouble do when the boys attacked Denver?

4. From what material did Big Mama sew her large dresses?

5. Where was Deborah buried?