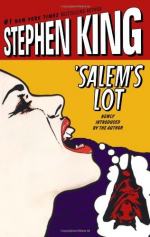 This character is a young, good-looking person who is a well-recognized writer. This character once lived in Jerusalem's Lot and has returned to write a book about a house that has fueled many bad memories since childhood, hoping to overcome these fears. This character becomes involved in a plot that will eventually require committing murder against a beloved character and an evil character.