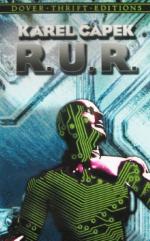 Karel Čapek
This set of Lesson Plans consists of approximately 92 pages of tests, essay questions, lessons, and other teaching materials.

Make enough small pieces of paper for the number of people participating. On half of the paper write R for robots and the other half leave blank. Put all the pieces of paper in a hat and ask each person to draw one out. The people that pick R are the robots, but should not say anything to anybody. The group should then mingle asking each other yes or no questions relating to whether they are human or robot. A robot should try and think what is like to be a robot and answer as honestly as possible. After 10 minutes stop the questions and decide the students who are the robots and the students who are the humans.

In the playground, divide the class into two groups, Team Robot and Team Human. Each team has a military base with a flag planted in...