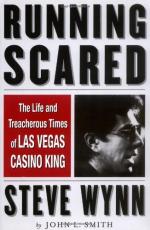 1. With what event does the author begin the Prologue of the book?

The prologue of Running Scared: the Life and Treacherous Times of Las Vegas Casino King Steve Wynn by John L. Smith begins with the destruction of the Dunes Hotel and Casino in Las Vegas.

2. When was the Dunes Hotel and Casino and Las Vegas destroyed?

3. How was Las Vegas trying to change its image in the early 1990s?

At the time, Las Vegas was attempting to become a new more family-oriented site rather than the former infamous Mafia-run city of debauchery and sin.

4. What hotel would be built in the place vacated by the Dunes?

The destruction of the Dunes would make way for a new hotel - Treasure Island - which would be located next to the Mirage.