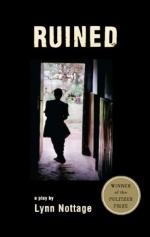 Related Topics
Sweat: Play
Crumbs From the Table of Joy

Lynn Nottage
This set of Lesson Plans consists of approximately 144 pages of tests, essay questions, lessons, and other teaching materials.

1. When Mama watches Sophie steal money, she watches her put it into what location?

2. What term does Salima use to classify her own identity when talking to Sophie?

3. What is the first name of the leader Kisembe, who "holds court" (19) at the beginning of Scene 2 in Act One?

4. Which character is singing about a bird when Scene 4 of Act One opens?

5. Christian tells Mama in Scene 4 of Act One that Yaka-Yaka has changed drastically. What is Yaka-Yaka?

1. What event causes Sophie to lose her smile in Scene 1 of Act One?

2. What does Sophie say about her past level of education?

3. What clue about Christian's true nature is revealed on his way out of the bar in Scene 1 of Act One?

4. What is the significance of Mama's query to Christian about whether he had "at least" [told] them this time"?

5. To whom does Mama appear to pledge her allegiance at the beginning of Scene 2 of Act One and why might appearances be deceiving in this case?

6. Who is Jerome Kisembe?

7. What major revelation does Salima share with Sophie in Scene 3 of Act One?

8. Provide evidence of the bond between Sophie and Salima that has grown since their arrival at Mama's.

9. What does Christian tell Mama about Sophie's injuries?

10. Discuss Nottage's goal for writing and producing Ruined, according to the text's introduction.

William Faulkner once famously claimed that the most important literature deals with the subject of the human heart in conflict with itself. Explain how the theme of Human versus Self is demonstrated within Nottage’s play Ruined. Create a decisive, arguable claim and prove it with quotes from the play.

Explicate the theme of courage within Ruined. What is Nottage’s message regarding courage and how do you know?