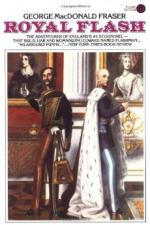 Royal Flash, from the Flashman Papers Chapter Abstracts for Teachers

• Harry Flashman has just returned from serving his country in Afghanistan. Upon his return, he discovers his wife has been unfaithful. He decides to leave it alone because he could risk her throwing him out of the house she owns.

• Flash starts to experience some of London's nightlife with his friend Speedicut. They go to a club called The Minor Casino and hire two prostitutes.
• The police arrive at the Minor Club. Flash and Speedicut manage to escape, but their curiosity gets to be too much and they head back to the club.

• The police chase Flash and Speedicut. Flash has an injured leg and decides to let Speedicut go alone while he enters someone's carriage.
• In the carriage Flash meets a woman called Rosanna and a man called Otto.

• Otto demands the police arrest Flash, but the constable refuses because Flash is a war hero.
• Flash...

More summaries and resources for teaching or studying Royal Flash, from the Flashman Papers.