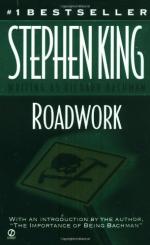 Stephen King
This set of Lesson Plans consists of approximately 131 pages of tests, essay questions, lessons, and other teaching materials.

1. Who does Bart go to see on the morning of November 23rd?
(a) Vinnie Mason- The man in charge of new accounts.
(b) Harold Swinerton- The gun shop owner.
(c) Stephan Ordner- Bart's boss.
(d) Don Tarkington- The owner of Blue Ribbon Laundry.

2. Where are Mary and Bart invited for New Year's Eve, even though the host knows they are separated?
(a) Vinnie Mason's.
(b) Walter Hanmer's.
(c) Roy Tarkington's.
(d) Steve Ordner's.

3. When Bart finally reaches home after blowing up all of the machinery at the 784 construction site, what does he realize happened to his car?
(a) He left tire tracks from the fire right to his house.
(b) He is hungry.
(c) The rear passanger window is broken out.
(d) He has been driving on a flat tire.

2. After Bart calls Magilore's, he goes home and finds Mary sick. Who does Mary compare herself to because of her voice?

3. What does Bart tell the man at the garage about his broken window?

4. Magliore tells Bart that even if his background checks out, he still may not do business with him. Why?

5. What wakes Bart up from his nap in the U-Wash-It laundry mat?

1. Why does Mr. Magliore try to throw Bart out of his office at his car dealership?

2. What does Bart tell the owner of the gun shop is the reason he is buying the guns?

3. Why does Bart stop at a laundry mat after taking his car to the garage to get his window fixed?

4. During the phone conversation on Christmas day with Olivia, what advice does Bart give her about leaving Vegas?

5. What happens to Bart as he is painting the smoke stack at the laundry?

6. What is said during a PSA (Public Service Announcement) that causes Bart to start grinning?

8. Why does Magliore refuse to sell explosives to Bart?

10. As a kid, Bart had a .22 single shot rifle. What caused him to put away the rifle forever?

More summaries and resources for teaching or studying Roadwork.