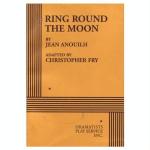 Ring around the Moon Fun Activities

Jean Anouilh
This set of Lesson Plans consists of approximately 120 pages of tests, essay questions, lessons, and other teaching materials.

Create a list of pranks or missions you would like to perform if you had an identical twin.

Draw or otherwise design a set for "Ring around the Moon." The conservatory room should include draperies and a trellis for characters to use as hiding places, along with any other items mentioned in the play.

Compose a song or poem as Frederic might have written to Diana, before drifting off to sleep in the rhododendrons below her window.

Assuming cell phones and text messaging were available at the time of the play, create a series of text messages between Hugo and the participants in his scheme to make Frederic fall in love with Isabelle.

Research the foods that well-to-do French would serve at a ball or party in the era of the play. Bring to class a recipe...

Ring around the Moon from BookRags. (c)2021 BookRags, Inc. All rights reserved.