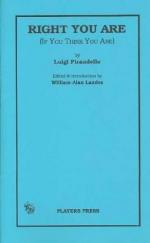 Right You Are, If You Think You Are Short Essay - Answer Key

Luigi Pirandello
This set of Lesson Plans consists of approximately 126 pages of tests, essay questions, lessons, and other teaching materials.

1. Who has refused to receive Amalia in Act 1, Scene 1? How does Amalia know about this person?

A subordinate of Agazzi's who is also a subordinate of the Prefect has rented an apartment in their building for his mother-in-law. The woman refused to allow them into her home when they paid a call.

2. What does Laudisi ask the women about their complain in Act 1, Scene 1? What do they reply?

Laudisi asks whether that's a good enough reason for them to lodge a formal complaint with Agazzi about his subordinate's behavior. Amalia says that she wants an act of just reparation, adding that they were only trying to make the woman feel welcome since she's new in town.

3. What does Laudisi say must be justified in the complaint the women have in Act 1, Scene 1? What is their response?

Laudisi tells the women that for a formal complaint to be justified, they have to prove that Ponza, the subordinate, moved his mother-in-law into the building for the deliberate purpose of upsetting them. Dina says they don't believe that's what he did, but they do believe he's strange.

More summaries and resources for teaching or studying Right You Are, If You Think You Are.

Right You Are, If You Think You Are from BookRags. (c)2021 BookRags, Inc. All rights reserved.