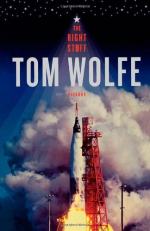 This character breaks the sound barrier and is the best of Edwards AFB's test pilots.

This astronaut is not only the only Marine among the original seven astronauts, but is also the oldest.

This astronaut nearly drowns when the capsule sinks after splashdown.

This person is the first American sent into space.

This astronaut is disqualified from space flight for a slight heart defect.

This astronaut tries to prove that missions without science experiments complete more orbits, land more accurately, and save fuel.

This character voluntarily switches from flight testing to flying patrol planes due to concern about wife and children.

This character overcomes a terrible...