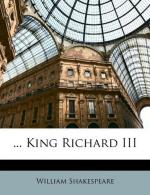 • Richard of Gloucester, King Edward IV's brother, recites a monologue in which he says that peace has come to England.

• In this same monologue Richard states he was born misshapen, and is not worthy of love, so he is going to be a villain.

• Richard has laid a plot to set his two brothers, King Edward and Clarence, against each other.

• His plot involves a prophecy he invented. This prophecy, which he told the king, says that the "G of Edward's heirs" would murder him.

• Richard is sure that Edward will take that to mean Clarence will murder him since Clarence's given name is George.

• Guards are leading Clarence to the Tower when they run into Richard.

• Richard feigns ignorance and concern and asks why Clarence is going to the Tower.

• Clarence explains that the king is convinced Clarence is going to kill him and is...