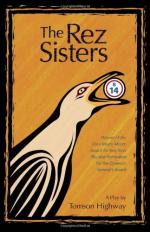 Tomson Highway
This set of Lesson Plans consists of approximately 132 pages of tests, essay questions, lessons, and other teaching materials.

Draw a map of the Wasaychigan Hill Indian Reserve including the major places mentioned in the play such as the houses of the characters.

Sketch one of the characters as he or she is represented in your imagination. Try to include elements discussed in the play.

Together with a group of other students, act out one of the scenes of the play.

Draw Nanabush as he would have appeared, disguised either as the seagull or the nighthawk.

Create a bingo game based on the play. For example, instead of using numbers and letters, use the names or places used in the play on your bingo cards.

Pretend you are Zhaboonigan. Write a journal of your interpretation of one of the scenes of the play.

More summaries and resources for teaching or studying The Rez Sisters.