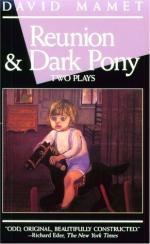 David Mamet
This set of Lesson Plans consists of approximately 101 pages of tests, essay questions, lessons, and other teaching materials.

1. When Bernie finds out that Gerry fought in a war, what does he ask Carol if Gerry does?

2. Spending time in __________ reminded Bernie that sometimes the present is all that's important.

4. What happens to cause the wreck with the car, according to the story of Bernie?

5. What does Carol ask Bernie for when they are discussing their times near Horace Mann School?

Bernie tells Carol how attractive she is, again and again, as though he can't believe it.

Part 1: Why do you think Bernie believes it's important to tell Carol she's good looking?

Part 2: How do you think you would have responded if your father from a long time ago told you that you were attractive?

Part 3: How do you think Carol feels about Bernie's compliments? Why?

Bernie suggests that he and Carol go for a walk, like they did when she was a child.

Part 1: Why do you think that Bernie is suddenly sentimental?

Part 2: Do you think a father and daughter can ever recapture the way things were? Why or why not?

Part 3: Do you think Bernie and Carol will create a relationship? Why or why not?

Bernie shares a story about how he crashed his car once night when drinking.

Part 1: Why do you think Bernie decided to tell Carol this story?

Part 2: Do you think it was a good idea for Bernie to tell Carol this story about the car?

Part 3: What does this story about the accident with the car tell the viewer or the reader about Bernie?

More summaries and resources for teaching or studying Reunion.