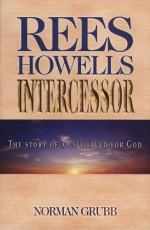 Norman Grubb
This set of Lesson Plans consists of approximately 129 pages of tests, essay questions, lessons, and other teaching materials.

2. What result did intercession for King Edward VIII yield?
(a) Elopement.
(b) Broken engagement.
(c) Abdication.
(d) A long engagement.

3. In "The Book of Common Prayer and King Edward VIII", many people contacted Rees for spiritual support and what else?
(a) Encouragement.
(b) Advice.
(c) Miracles.
(d) Prayer.

4. What did the Ethiopian intercession plant for future intercession and prayer?
(a) Good feelings.
(b) Seeds.
(c) Doubts.
(d) Love.

5. In "The Book of Common Prayer and King Edward VIII", God used Rees as a willing ___ to intercede for people at the highest levels.
(a) Mediater.
(b) Preacher.
(c) Servant.
(d) Vessel.

6. In "Intercession for Dunkirk", Rees and others were called to intercession for the safety and ___ of the entire world.
(a) Salvation.
(b) Peace.
(c) Love.
(d) Unity.

7. In "Intercession in Dunkirk", Dunkirk, despite intercession, was called to do what?
(a) Stop fighting.
(b) Stand and fight.
(c) Evacuate.
(d) Surrender.

8. In "The Battle in Britain", people who felt the intercessors said they felt divine what?
(a) Prayer.
(b) Hope.
(c) Strength.
(d) Intervention.

13. The intercession in Ethiopia was for the country to be spared a takeover by whom?
(a) Mussolini.
(b) Roosevelt.
(c) Mao Tse Tung.
(d) Hitler.

15. Rees and his wife sought reassurance from ___, even though they knew they should buy the prime estate for a second bible college property.
(a) God.
(b) College staff.
(c) Local mission leaders.
(d) College trustees.

1. In "Third Estate and Children's Home", what type of huge project had just been completed?

2. In "Revivals in Africa", God used the country's crisis to bring about more ____ as people witnessed the power of the "white man's God."

3. In "Buying the First Estate in Wales", Rees and his wife met with the ___ to obtain the first site for the bible college.

4. In what year did the college experience a visit from the Holy Spirit?

5. In "Intercession for Dunkirk", Mr. Churchill's ___ remained strong during this time.