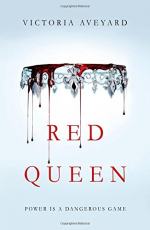 Victoria Aveyard
This set of Lesson Plans consists of approximately 115 pages of tests, essay questions, lessons, and other teaching materials.

Write 10 questions that you would ask the author, Victoria Aveyard, if you could interview her.

Create a list showing the High Houses, the heads of the houses, and their typical powers.

List the abilities that Silvers can have and what each ability can control.

Read another book in the Red Queen series.

Draw a map of Norta.

Imagine that you are a reporter and broadcast an incident in the book as if you are reporting live from the scene.

Discuss with a group what ability you would like to have if you were a Silver or a Red with special powers.

Create a diorama of one...