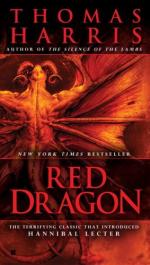 Thomas Harris
This set of Lesson Plans consists of approximately 129 pages of tests, essay questions, lessons, and other teaching materials.

1. What caused Reba to be face down in the dirt?

2. Who does Dolarhyde want to share his secrets with?

3. What does Dolarhyde do with the painting?

4. What does Graham think is the connection between the two murdered families?

5. What does Crawford's boss push Graham to create?

1. What does Reba tell Police when they show up at the scene of the house fire?

2. What is Dolarhyde's reaction to the press conference on Lounds' murder in Chapter 33?

3. After Graham is given the remains of the killer from the charred house site what does he wonder about?

4. What does Graham find when the DC-3 plane lands in Chapter 52?

5. What is Reba's reaction when Dolarhyde tells her that he would rather her die with him than to be left to the Dragon?

6. Why does the fire inspector not expect to find remains of Dolarhyde?

7. What does Graham dream about in the end of Chapter 54 while in the hospital?

8. What strikes Graham as odd about the killer showing up at the Brooklyn Museum?

9. What is Dolarhyde looking for and making note of when he goes to the Brooklyn Museum in Chapter 39?

10. When Dolarhyde has a discussion with the Dragon in Chapter 37 what are the main differences in the two personalities?

Graham and Molly lost a lot while he was working on the case. Could their marriage be salvaged? Why or why not? Was Graham putting the case, or his need to work, before his marriage and family? Explain.

Reba McClane had believed that Dolarhyde was a shy gentleman and that the reason for his behavior was simply that he was awkward. What did Dolarhyde do that should have given Reba warning signs?

Why is it that Dolarhyde doesn't fully realize that he has begun to have feelings for Reba? Why is it that the service man at the station attempting to look up Reba's dress is what gives him an idea that he is beginning to care for her? What does this reveal about Dolarhyde?

More summaries and resources for teaching or studying Red Dragon.